Welcome to the Alliance for a Discrimination-free Rhineland-Palatinate

The General Equal Treatment Act (Allgemeines Gleichbehandlungsgesetz, AGG), which came into force in 2006, has significantly improved legal protection against discrimination. It aims to prevent or eliminate discrimination on the grounds of ethnic origin, gender, religion or belief, disability, age or sexual identity.

YOU HAVE RIGHTS!
Protection against discrimination is a human right.
www.antidiskriminierungsnetzwerk-rlp.de

What is discrimination? – And who can provide help if I am being discriminated against?

In 2006, the General Equal Treatment Act (AGG) made this fundamental legal protection against discrimination more concrete. Unless there is an objective reason, the AGG prohibits unequal treatment on the grounds of ethnic origin, gender, religion or belief, disability, age or sexual identity. However, the scope of the AGG is limited to the world of work and (legal) relationships between private individuals. It does not apply in other important areas such as education.

The AGG gives those affected by such unlawful unequal treatment the opportunity to defend themselves legally. In reality, however, it is often difficult and costly to prove discrimination and to assert claims for redress or compensation: The AGG is complicated and does not cover all forms of discrimination. In addition, many of those affected have long since become “used to” such discrimination or are reluctant to “take on” their employer or another institution that is perceived as overpowering. Furthermore, there is still a lack of nationwide support structures to assist those affected.

How does unlawful discrimination under the AGG manifest itself in everyday life?

A young man with dark skin is only allowed to pay with cash in a clothing shop because “many Africans try to pay with stolen credit cards”.

A female employee in a bar is forbidden to work at the counter with reference to “customer interests” as long as she sticks to her short haircut.

The application of a woman wearing a headscarf in a doctor’s office is rejected because “the headscarf is an expression of a fundamentalist attitude which we do not want here”.

A man wearing a kippa is refused a ride on a public bus because “Jews are harmful to the community and should therefore drive a taxi”.

A homosexual couple is refused service in a restaurant on the grounds that their presence is disturbing and inconveniencing the other guests.

A woman in a wheelchair is told by a public housing association that her application for a flat will not be processed because “wheelchairs bring so much dirt into the stairwell”.

The application of an employee in a software company to participate in a training course is rejected: she is “too old to understand the contents and will only be with the company for a few more years anyway”.

A trans woman is harassed by her colleagues at work with obscene comments. Her employer refuses to take action against her because “her appearance provokes such harassment”.

MEMBERS OF THE ALLIANCE FOR A DISCRIMINATION-FREE RHINELAND PALATINATE

However, people who have experienced discrimination are not alone in Rhineland-Palatinate:

The member organisations of the “Alliance for a Discrimination-free Rhineland-Palatinate “ offer empowerment, counselling and support to those affected. They can organise legal or political support in concrete individual cases or become active themselves by approaching those who are accused of discrimination. Often this helps to clarify a situation, to sensitise the counterpart or even to remedy the situation. They can document the individual experiences of many affected people and condense them into an overall picture, publicly point out grievances and formulate demands to politicians for better protection against discrimination. And they can strengthen those affected by putting them in contact with other people who have also been discriminated against. This can make it clear that they are not alone with their experiences and that they are not responsible for their experiences.

People who have experienced discrimination also have access to free initial legal counselling through the State Anti-Discrimination Office at the Ministry for Family Affairs, Women, Youth, Integration and Consumer Protection of the State of Rhineland-Palatinate (Antidiskriminierungsstelle des Landes Rheinland-Pfalz (LADS)). Within the framework of this counselling, a lawyer examines whether claims can be derived and enforced from the AGG or other laws. For those affected, such an assessment and legal evaluation of an experience of discrimination is of great importance in order to being able to decide on the further course of action.

Despite these support structures, there is still much to be done in the area of protection against discrimination. The member organisations of the Alliance for a Discrimination-free Rhineland-Palatinate therefore advocate:

We cordially invite you to contact us if you are

YOU ARE NOT ALONE

Funded by: MINISTRY FOR FAMILY AFFAIRS, WOMEN, YOUTH, INTEGRATION AND CONSUMER PROTECTION OF THE STATE OF RHINELAND-PALATINATE 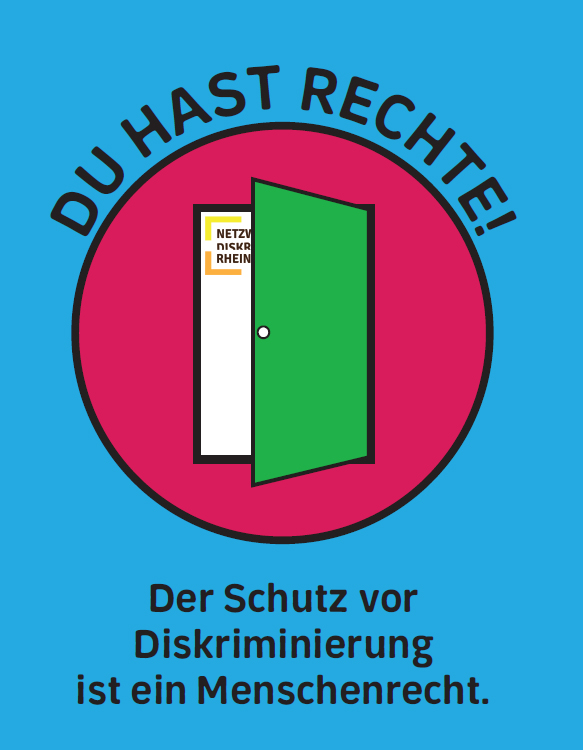